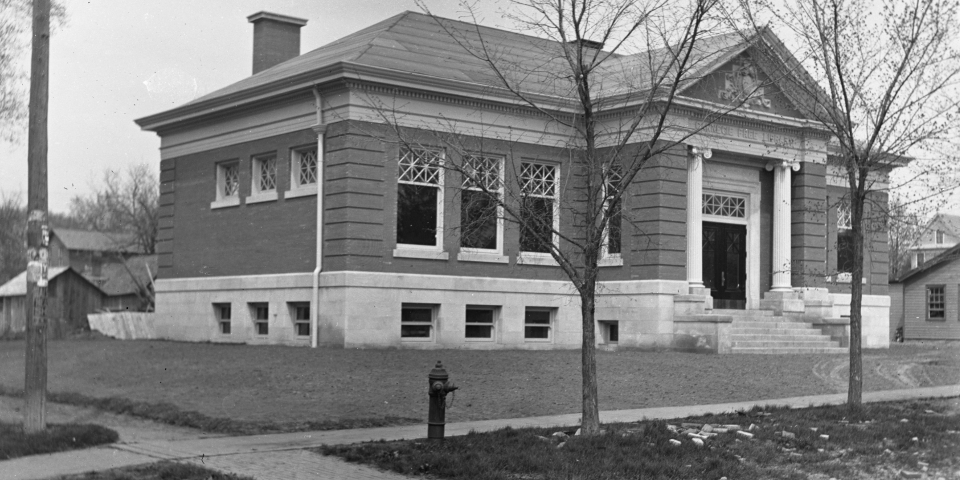 On July 1, 2021, the Baraboo Public Library officially became Carnegie-Schadde Memorial Public Library. The name honors the family of Juanita Schadde, whose $2.5 million donation helped make the library expansion project possible. The Schadde family have been long-time Baraboo proprietors of Schadde Plumbing and Heating, founded a few years before the date of the library’s 1895 charter. The name also recognizes the original major benefactor of the library, Andrew Carnegie, the industrialist and philanthropist whose $15,000 grant to the City of Baraboo on March 14, 1902 enabled Baraboo to build a public library.

The original name of the library, Carnegie Free Library, will remain part of the historic 1903 edifice, even after the library expansion is complete.

“By the late 1800s, many people in Baraboo had worked for years to establish a public library, with meetings and fundraising efforts, and collecting books to make it a reality,” said Library Director Jessica Bergin. “The Carnegie donation was significant enough to make a library building in Baraboo a physical reality. Similarly, staff, volunteers, and donors had worked since the early 2000s to expand the Baraboo library, and the Schadde donation put the current library expansion project over the finish line for City approval.”

Construction was slated to begin this spring, but the final approval on the $6 million rural development loan from the United States Department of Agriculture was delayed.

“We are hopeful we will begin construction this summer or fall,” Bergin said. “We are preparing for the many changes that will occur in the physical library building over the next several months. The library will remain open to the public during construction.”

“Our new name signals our enduring connection with our history,” Bergin said. “We will maintain the library’s role as a community center for lifelong learning and literacy, bringing people, information, and ideas together.”

The library’s website address changed to www.csmpl.org in early July.

(Updated July 7, 2021)
On September 18, 2020, the Baraboo Public Library observed the 125th  Anniversary of the granting of its charter as a public library by the State of Wisconsin in 1895. In anticipation of this historic milestone, the library put out a call for memorabilia related to the library’s history, including artifacts such as photos, flyers, pins, equipment, and old library cards. The library also sought stories about the recent and more distant library past from current and former Baraboo area residents.

“If folks want to just briefly lend their library keepsakes to us, we can scan or photograph them and return the items to their owners,” said Library Director Jessica Bergin. “If people have items they wish to donate, we will assess if we can adequately store, preserve, and once the expansion is completed, display them.”

One of the conditions of obtaining approval in June 2020 for the library expansion by the State Historic Preservation Office was a commitment by library leaders to create a permanent library history display in the expanded library.

“We would like the display to focus on the role of the community in our library history: how Baraboo has helped the library grow, and how the library has helped Baraboo grow,” said Library Trustee Lacey Steffes.

In addition to collecting physical artifacts of library history, the library remains interested in collecting stories and reminiscences by area residents and former residents of all ages, including former library trustees and staff members. These can be in written form or recorded as oral history contributions. Individuals wishing to contribute artifacts or stories should contact Joan Wheeler at 356-6166. She will work with contributors to find a convenient way for them to share their historic library memorabilia, or to preserve their stories as part of the historical record of the Baraboo Public Library. 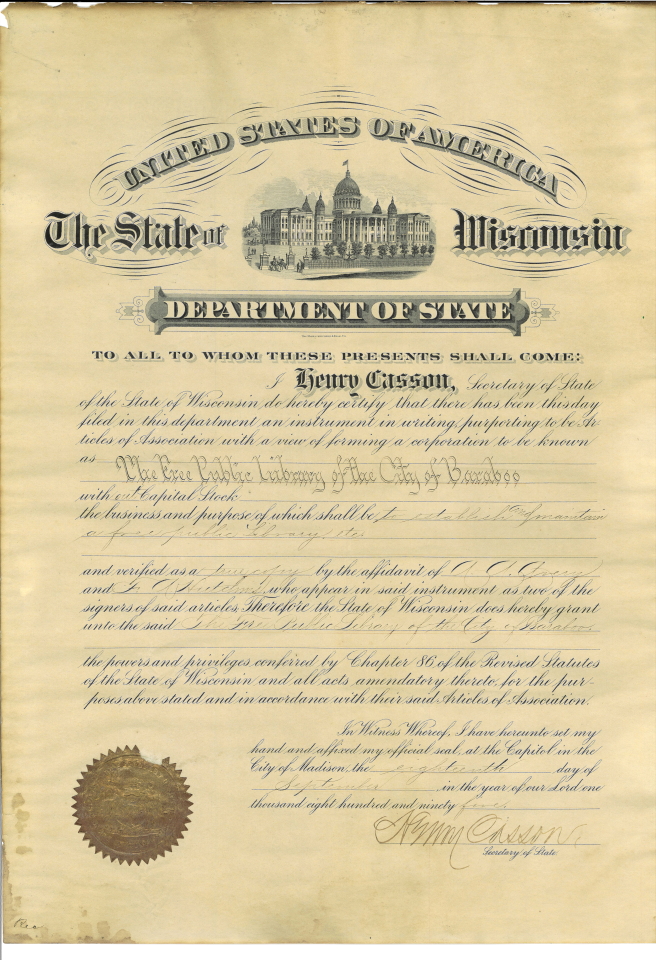 Charter for The Free Public Library of the
City of Baraboo, September 18, 1895
(Click for larger pdf image.)

History of the 1903 Carnegie Public Library

In 1903, the Baraboo Public Library opened at 230 4th Avenue. Previous to 1903, the library was housed in a room at the City Building. The library was chartered by the State of Wisconsin in 1895.

The 6,000 sq. ft. building was designed by Louis Claude of the Madison firm, Claude and Starck. Louis spent his youth at his parents' home at Devil's Lake, giving special meaning to his selection as the architect. A $15,000 grant from Andrew Carnegie made the construction possible. Carl Isenberg, a local contractor, was the builder. Architecturally, the building is of the neo-classical style with an exterior of brick and limestone. The roof is of clay tile. Interior features of note are the red oak woodwork and a frieze in the east reading room, originally the children's room, that is a copy of Cantoria by Donatello. There are two fireplaces, one upstairs and one downstairs.

At the opening of the library, the collection numbered 5,000 books. Story hours for children were begun in 1908. The library has been in continuous operation since 1903 except for a 3-month closing in 1936 following a fire that damaged the west and central areas of the main floor. The fire began in a basement room being loaned to a WPA sewing project.

From 1941 to 1945 library service was extended to some 13,000 construction and plant workers who came to establish Badger Ordnance Works. Following the closing of the plant in 1945, Badger Village was converted to housing for married veterans returning to study at the University of Wisconsin at Madison. They, too, sought library service from Baraboo Public Library.

In 1963 the Sauk County Library was established. As such, library service was officially extended to the whole county. A countywide cooperative system, with headquarters in the basement of the Baraboo library, provided the impetus to new growth for the library.

The first major space change occurred in 1969 when the children's library was moved to the basement. More remodeling in 1975 provided a new checkout desk, new reference shelving, and an AV Room in the basement. In 1982, Baraboo undertook a major remodeling and addition project, increasing the library's space from 6,000 sq. ft. to 15,000 sq. ft., providing handicapped accessibility with an elevator, upgrading the library's energy efficiency. The cost of the project was $718,000 with funding provided by the City of Baraboo and $100,000 of Library Trust Funds. Architects for the project were Strang Partners of Madison, Wisconsin. Special care was taken to preserve the architectural integrity of the building. In 1981 the building was listed on the National Register of Historic Places. Exterior remodeling in 1996-97 replaced the front steps, added concrete benches and planters, new lighting and landscaping.

The library entered the computer age in 1985 with the installation of an automated circulation system and online catalog, in cooperation with a consortium of South Central system libraries. An updated system was installed in 1994, operated by LINK, the name of the new cooperative venture encompassing 24 libraries. LINK expanded to in-library public access computers and dial-in access from home soon after. Library patrons now have electronic access to over 2,000,000 volumes. Patrons may place holds and the items are delivered to system libraries five days a week. In 1997 staff and public Internet access was introduced.

Although a vital member of the South Central Library System, the library is an independent municipal library governed by a library board appointed by the mayor with the approval of the City Council. The administrator of the library is the Library Director, who functions under the direction of the board.