On November 23 the Lit Wits Book Club will discuss the book Who Thought This Was a Good Idea? and other questions you should have answers to when you work in the White House by Alyssa Mastromonaco. We will meet at 6:30 PM in Room 12/14 at the Baraboo Civic Center, 124 2nd St., Baraboo.

"If your funny older sister were the former deputy chief of staff to President Barack Obama, her behind-the-scenes political memoir would look something like this...

"Alyssa Mastromonaco worked for Barack Obama for almost a decade, and long before his run for president. From the then-senator's early days in Congress to his years in the Oval Office, she made Hope and Change happen through blood, sweat, tears, and lots of briefing binders. But for every historic occasion-meeting the queen at Buckingham Palace, bursting in on secret climate talks, or nailing a campaign speech in a hailstorm-there were dozens of less-than-perfect moments when it was up to Alyssa to save the day. Like the time she learned the hard way that there aren't nearly enough bathrooms at the Vatican. Full of hilarious, never-before-told stories, WHO THOUGHT THIS WAS A GOOD IDEA? is an intimate portrait of a president, a book about how to get stuff done, and the story of how one woman challenged, again and again, what a "White House official" is supposed to look like. Here Alyssa shares the strategies that made her successful in politics and beyond, including the importance of confidence, the value of not being a jerk, and why ultimately everything comes down to hard work (and always carrying a spare tampon). Told in a smart, original voice and topped off with a couple of really good cat stories, WHO THOUGHT THIS WAS A GOOD IDEA? is a promising debut from a savvy political star.”~ goodreads.com

Please complete the one-time registration form so we can get your name and email address. We will email you meeting updates.

All people in the Civic Center must wear a mask over mouth and nose. 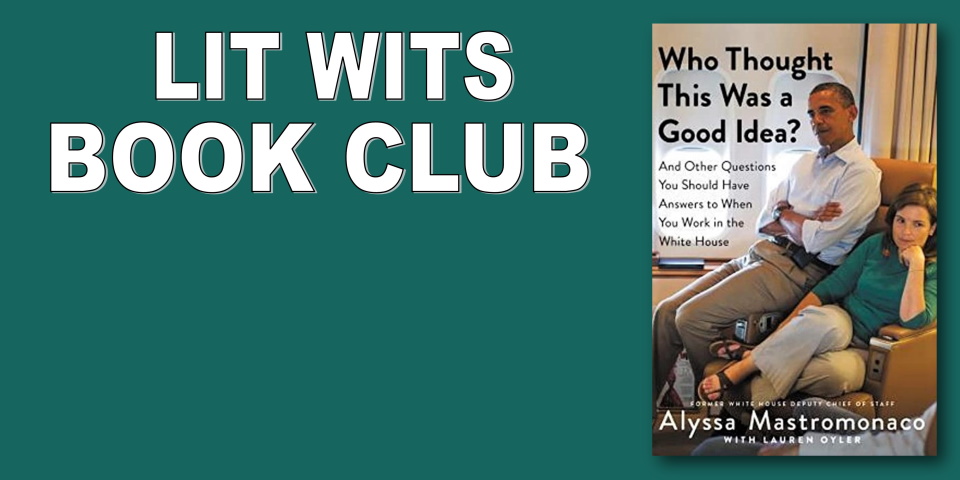